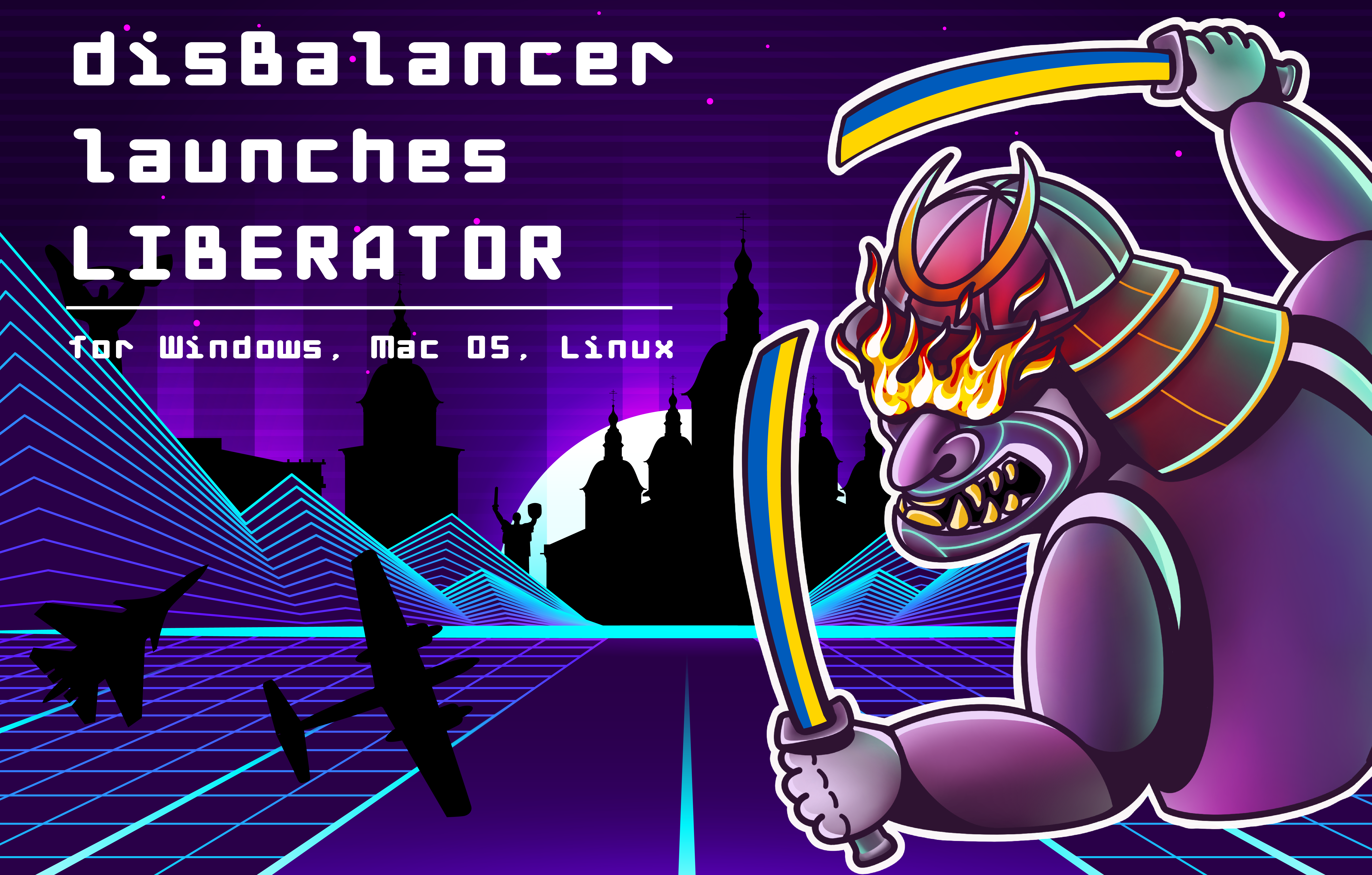 We are thrilled to launch a new app – LIBERATOR, an entirely new level to fight Russian propaganda outlets.

It targets Russian propaganda websites and sources that contribute to the Russian invasion of Ukraine. We want to make all the murders and violence caused by Russian military forces STOP.

📢 To know more about disBalancer current mission, read our announcement.

Anyone who wants to join our ranks to make strategic Russian organizations that damage our country’s unreachable install the Liberator app.

PLEASE, SHARE THE LINK ON THE APP AND LET’S #stopPutin TOGETHER!

THE MORE PEOPLE RUN THE APP, THE MORE EFFECTIVE ATTACKS ARE!

✔️Use it more accessible than the previous version

✔️ No technical skills are required

Liberator is available for any OS, including Windows, Mac OS, Linux. Finally!

The app is updating automatically now.

We are gaining more and more newcomers every day. Improving our algorithms constantly and planning to implement more types of attacks, the problem of the application relevance for each user turned out to be a problem. Therefore, we spent a little more time making the attacking process remain ongoing.

Plans for the next 2 days:

✔ Controlling the number of attack threads

✔ The ability to independently choose targets by a user

2. Go to the launch panel and open the terminal

5. Enter the command “chmod +x The name of the downloaded file” + Enter

Download one of the file available for your OS:

2. Open the Terminal in the folder with the downloaded file

3. Enter the command “chmod +x The name of the downloaded file” + Enter (or TAB)

3. Open the unzipped folder in Terminal

Turn on the VPN connection to encrypt your data.

Use hVPN app for free with unlimited capacity.

You can also use any VPN resources you prefer.

You Can Also Use PROXY SERVERS Instead Of VPN!

To avoid any runtime problems until the app is signed:

Add the application folder to your antivirus exclusions to avoid blocking task execution, as some antiviruses could detect it as a hacker tool. Adding an application to the firewall exception would also be a good idea. The app isn’t server-based; it’s a simple client, so you don’t need to be aware of the hacking of the exposed web interface and host.

Did Something Go Wrong❓

Join our English or Ukrainian chat and feel free to ask anything.

Backup. If the connection is lost all new posts and announcements will be there.

Don’t miss and be the first to read disBalancer news on Twitter.