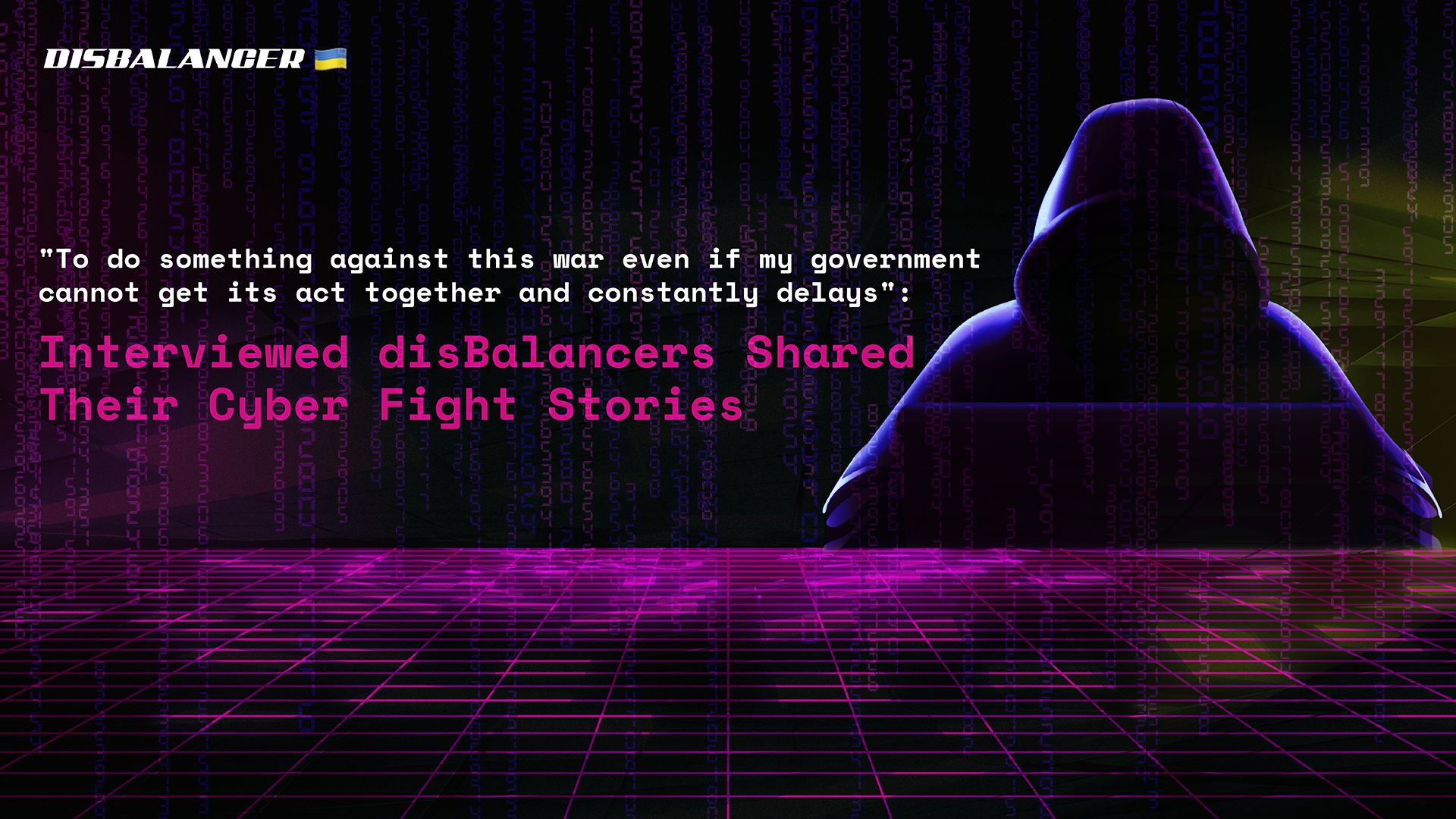 We usually opt for ‘toughen up’ articles, yet there’s time to put the bravery armor aside and reveal the soft spots of seasoned warriors.

Unparalleled support, that’s what we read in your answers. And we even got tearful. You got us at: ‘EVERYONE can do something and that is how all should be thinking.’ Followed by ‘we sorted through all our house to find anything we could spare’ and ‘I fight for my land’… Well, you made us try to make even more software updates and features.

We are blessed to have allies like you, thank you!

Hi y’all from America. My name is J453M0, and I have been helping Ukraine since about 2 weeks after the hostilities started and IMMEDIATELY after I heard the call from one of the cyber news channels on Youtube about the Ukrainian Hacker Army, and how to get involved I was down for the fight.

I started off on the hackenproof.com page and went from there. I found Liberator to be, ‘EASY AF’ to use. Fire and Forget type weapon. I don’t want to say too much on this aspect, but I saw a way to make Liberator more effective and it worked.
Not only has Liberator made it easy AF to join the fight, but has allowed the average person to be a part of the Team that is pulling off the largest most effective DDoS champagne the world has ever seen. I love this shit.

I do other things for The Ukrainian Cyber Defense Team, (people react badly to Ukrainian Hacker Army), that have helped with acquiring data for more effective attacks. I don’t want to say too much on this either. But I can tell you that I try to leave at least one Twitter to invite a new person or influencer a day. I try to be very friendly and invite EVERYONE. Because everyone can do something. Everyone, me, you, Ukrainians, the World, can do something to help. Wether, that is a Ukrainian child talking to people about their plight to build support or influence from the world or people like me that think of creative ways to fight. EVERYONE can do something and that is how all should be thinking.

I have my Liberator running for 3 months right from the start of russian full-scale invasion.

I learned about this initiative from one Telegram group that announced Liberator’s launch. As a Ukrainian, I considered it necessary to help my state as much as I am able to. The main thing that keeps me motivated is the protection of my homeland, and being on the cyber front is no less necessary stuff for me.

Besides being involved in disBalancer, I actively support Ukraine in other ways. For instance, by donating to the Armed Forces of Ukraine and assisting the cyber fight on the side of Ukrainians with other DDoS tools designed to shoot russians down. I use a few other applications like UA Cyber SHIELD, dn1000n, dripper, MHDDos, and 5 sites for DDoS attacks.
Besides, I report on russian propaganda telegram groups in order to hinder the lies that spread among the people, including in the occupied territories.

What can I wish all Ukrainians? Do not lose one’s heart, keep strengthening the scale and spirit of Ukraine’s resistance, and believe in the strength of the Ukrainian people and Ukraine’s Armed Forces. Glory to Ukraine!

Hi everyone. I am using Liberator since the 24th of April and since then 24/7.

I am from Germany… which is part of my motivation: to be able to do something against this war and this aggressor even if my government cannot get its act together and constantly delays. 🙁

I have always liked the disBalancer project from the day I first heard about it in the HAPI chat. It is definitely one of my favorite crypto projects, and I have already gotten thrown out of a couple of TG groups for too much shilling of DDOS. When the war started, I was just baffled by the russian aggression, and I had never thought that something like this would be possible (even if the year-long troops build up just outside the border could and should have been a sign). I felt so helpless due to the size of the russian aggression. I wanted to help. I have a server in my house and a root server in a server center, but I didn’t want them constantly hooked up to a VPN for running Liberator. I then saw someone in the TG group showing Liberator running on a raspberry pi 4, and since I had one in my cellar lying around and collecting dust. It then took a bit of time to find the time to tinker with it and get it set up. Tried different distributions and different VPN services, and with the help of two guys from the TG community, I was able to get it up and running.

On a raspberry pi which I don’t need, I can just leave it running 24/7, and I only have to check in on it from time to time (a few times per week), and it does not need much power. I never experienced any problem from which it would stop running. Only once I updated it manually to the newest version because I saw by chance the fresh new version was released 5min before I had visited the Github page. It feels good to be able to help, even if it is just such a small action.

What would motivate me even more? Maybe a special kind of disBalancer NFT for the verified users of Liberator. 😉 I saw that there might be DDOS NFTs for those who hold more than 1000 DDOS until the war is over (which is easy for me because I’m buying more as soon as I can)… But maybe you could make special edition NFTs for the cyber warriors?

I am not involved in the cyberwar in any other way (except by keeping my servers and computer software up to date on a more regular basis than before to close any security risks).
On the day of the invasion, a friend at my university organized a big “help for Ukraine” initiative. For years he already had a study/student cooperation with the University in Lviv, where he also met his soon-to-be wife. He organized a huge help convoy which brought all sorts of donations by the people of our city to the Polish border to help all refugees and troops. We sorted through our house to find anything we could spare: clothes, iso mattresses, sleeping bags… Anything useful. Our small minivan was completely stuffed up to the roof, and only the driver seat was free.

Via my friend, we also contacted fleeing refugees who were on the way to our city. Our house is big enough to accompany more people since we have two rooms on the first floor used as guest- & hobby rooms (they will later be the youth rooms for our sons when they are older). End of March 4, refugees from the northeast region around Kyiv found shelter in our home. We helped them as much as we could and have found an apartment for them and their 4 other friends & relatives who also arrived in our city.

To all Ukrainians, I can only wish them all the best and a world-shaking success in their wish to defend their rightful territory (including the part that was taken from them in 2014). Their bravery and courage in standing against such an enemy are unparalleled.