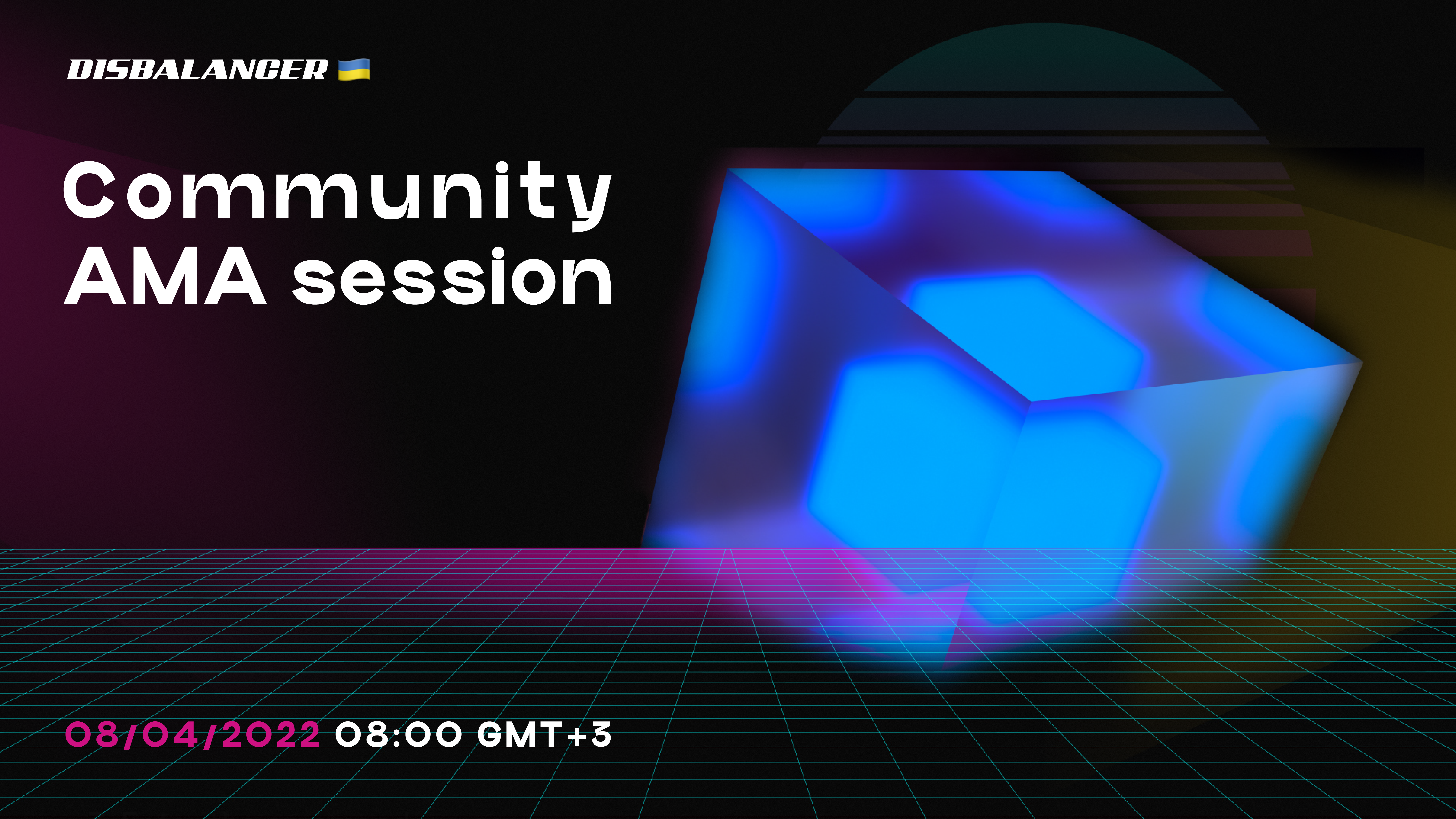 disBalancer held an AMA community session on 8 April 2022. The team was asked about its operations during the cyberwar, B2B product launch, and new opportunities provided by a raised number of newcomers who run Liberator. We are delighted to answer your questions and keep in close touch with you. You can find the text version of the AMA below. Many thanks to everyone who joined this AMA and show interest in disBalancer! More updates and announcements are coming!

With all the development work the team has done during the war to make the app more powerful how much farther along does this put the B2B app than previously planned?

We’re often updating Liberator, which could be used by disBalancer B2B operations easily. The Dev team has upgraded Go-client (which could be used on any platform), added more methods, and improved performance. Now we’re enhancing stat calculating and monitoring with upgrade methods. Once it finishes, we could start performing stress/load testing for business purposes.

Very impressed by everything that has happened with $DDOS recently – wanted to check in to see if the slight pivot in priorities and recent growth will also result in a change in tokenomics/token use case.

Yes, further changes in tokenomics will be, and some new utilities too. We did more than planned in a short time. We are now looking for new features for our solution with more utilities for business and the army.

Where is the Blockchain technology used exactly in disBalancer? What I mean is whether or not the DDOS token has another role in the tokenomics rather than just being a payment method, is it used to provide a secure connection between computers running the app and servers.

At this moment, we are not using blockchain technology in the Liberator app. Stress testing as a cybersecurity service doesn’t require blockchain. But we are a DDOS token-powered project aimed to receive payments and implement a reward system with $DDOS.

I am very curious. If the war between Russia and Ukraine will continue for many years, will the focus of DDoS ​​still be on the liberator and Russia’s attack?

We are going back to our daily operations as soon as possible, and it won’t be affected by the war. The team now works on the application improvements and disBalancer business perspectives and research. So don’t worry: we partly exceeded the disBalancer roadmap, and it means we are only moving on.

Is it still planned to add the functionality that allows websites to resist DDoS attacks, by distributing computing power to users?

That would be great! We are looking forward to making such a product someday. But now, it is not scheduled. We are aiming to make perfect what we are currently developing.

I wonder when the b2b application will be ready and people who believe in the project will start making money?

We are working on some issues with the correct calculation of users’ performance to implement a reward system.
Before we launch disBalancer with rewards by DDoS usage, we need to maintain monitoring and metrics to have a system analysis on how many rewards each user should receive (some computers give more performance/some less).

Concerning the way DDOS rewards are distributed to people running nodes, does the app has an internal wallet that is designed to receive DDOS tokens automatically via smart contacts so that the user might need to make any registration and all he has to do is install and running the app, or he needs to create an account and tokens will be stored in his account until he decides to perform a withdraw to his wallet?

Now we see the solidarity of our Ukrainian team and the help of our foreign friends. All the guys now help on a volunteer basis. But to attract a new and larger audience, we will promote and send gifts to users. You can see more about this later in the announcements.

Wen can we DDoS the whole of Russia?

Scan all Russian subnetworks and DDoS on them? 🙂 It requires detecting ISP servers and making huge loads (as I saw one DDoSer with 3TB/s speed, this is enough to kill Github…) But usually, hosters are very good at DDoS protection. We could try to ping all DNS servers we know, get .ru sites, and DDoS them, but this is also an insane idea, IMO.

When will there be a listing on other exchanges? And then we only at http://gate.io need more opportunities and more liquidity. Then our army will be represented by a large number of soldiers. Plus more servers and more advertising.

It’s no secret that all the listings on the top exchanges are paid. Spending pennies on listings is not a priority task. So we would better grow our community on our own to make it happen. It is what we are doing now.

I would like to see logs with the result of the work as a percentage. How effective is the VPN and what is the server response? it would be a plus to display online participants at the moment. Thanks for your work!

It will be available after the client updates. We can save these stats and metrics then. The client states will be able to make calculations and analytics to be publicly disclosed.
The effectiveness of VPN is not a question for us, but for the VPN provider.
What server responds (codes), we already counted.
We already have the counter on our website. It will indicate numbers more correct soon.

Installing and running the app, or does it need to create an account and tokens will be stored in his account until he decides to perform a withdrawal to his wallet?

After launching our application, you will have an account on our website. It will be connected with the application and wallet.

Hi Team! You are doing a great job! Wanted to ask. Since DisBalancer was mentioned in several famous media (The Washington Post, Le Monde, etc.), have you been contacted by any new Clients who are interested in the DDoS services? Did you notice any difference after the articles?

Sure, attention to disBalancer raised significantly over the past month and a half. Some clients have already reached us. They are looking forward to cooperating with us after our B2B product is launched.

I know that this project will come to very good places in the future, and I’m excited to think about it. Will there be a marketing campaign waiting for us anytime soon?

Thank you for your support. We are now moving towards 100 thousand active users. It provides a new wave of our activities, including strengthening the project’s presence in the media space.

Since we don’t know when this war will end; is there a plan in place to launch B2B services in parallel to Liberator while the disBalancer name is getting a lot of press coverage for the great things you all are doing?

That is what we are going to do in the nearest future!

Will disBalancer become a corporation?

We are all working to make it happen one day)

When will the gateida BSC network be effective? Will there be a stock market listing soon?

We’re definitely not looking that way now. With gate on BSC, there is no progress, unfortunately.